Following the completed restoration of Newtown Castle, Ballyvaughan in 1994 (illustrated), a series of meetings was held to prepare for the first international ÓLochlainn reunion in September 1995.

Many ÓLochlainns attended this reunion, with over one hundred from North America, as well as a dozen enthusiastic Clan members from the South Australian city of Adelaide, including one family of four generations.

The pleasure of meeting so many Clan members from around the world was increased by the opportunity to learn together more of our shared heritage, and walk around sites in County Clare and the Burren. 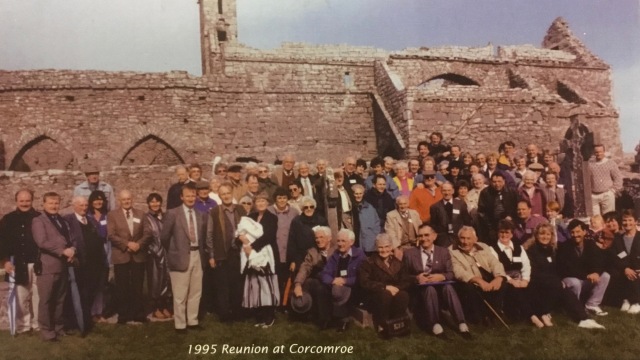 A most unexpected development of this reunion emerged, when Brian OLoghlin (Australia) was introduced to Dónal Loghlen OSullivan (Dublin). Those 1995 series of contacts began outside Hyland’s hotel, when Dónal made initial contact with an Australian family group by displaying his genealogy tree to Peter from Queensland, Australia.

Further contact developed at The King Thomond Hotel, Lisdoonvarna during the Saturday bus tour of North Clare. The Ballyvaughan and Lisdoonvarna meetings, helped bridge a gap of some one hundred and fifty years which began with the emigration of Brian’s ancestor, James OLoghlin from Grey Rock (Cragreagh), outside Lisdoonvarna to Australia c 1840. The renewed family contact was further developed, when Dónal from Dublin visited Brian OLoghlin at Mount Tamborine following the 1995 reunion.

From the opening ceremony at Newtown castle on Friday, through to the christening ceremony at Corcomroe abbey, ending with a lengthy musical jamboree at Hyland’s Burren hotel on Sunday evening, visitors and locals were bombarded with many facts and many hours of cultural fun! A memorable song was described in the April 2015 post The West’s Awake.

One of the reunion speakers, Brother Micheál Fearghaois OConnor also co-authored the reunion booklet, A Short History of The ÓLochlainn Clan, with Eamonn ÓLochlainn.

The 1995 reunion also demonstrated how quickly technology is changing our modern lifestyles; the now ‘ancient’ Fax machine was chosen to contact Clan societies within Australia, which permitted Australians to participate in various aspects of the reunion, in particular the musical-marathon at Hyland’s Hotel on the Sunday evening.

Today, a stone plaque at Newtown Castle commemorates the 1995 reunion.

Group photo 1995 by Mort OLoughlin. Others in this post by Brendan O’Loghlin.

Musician in Canberra Australia
View all posts by BrendO →
This entry was posted in Clan DNA, History and tagged Ireland, music, people, reunions. Bookmark the permalink.

This site uses Akismet to reduce spam. Learn how your comment data is processed.